On the Popularity of the Danish Royal Family (and Jante Law) 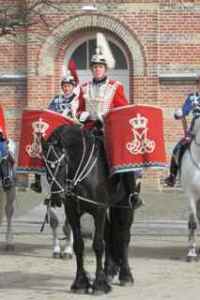 When the rest of the world’s monarchs are attacked by the tabloids and struggling to find relevance in the modern world, especially in an economic downturn, Denmark’s Royal Family is remarkably popular amongst their people.

It struck me as strange, when the Danes pride themselves on having an egalitarian society, and upholds a cultural “law” called the Jante Law. My friend did a more extensive post on the Jante Law itself, so I’ll just summarize it here as “you are no better than anyone else”. The very idea of hereditary transference of inherent power violates Jante Law.

When I ask the Danes why they support the monarchy, their responses are very pragmatic, as Danes typically are: “they do a good job representing us to the outside world” or “tourists like it”. Another opposing force to Jante Law is their strong sense of tradition. Americans here are often called out for getting the condiments mixed up on their fish smørrebrød, or open-sandwich: the pickled herring gets a curry mayonnaise, but the fried fish gets remoulade, never mind that they are both egg-based yellow sauce, and tastes fine either way. “You know we’re going to have to kill you right?” has been the typical Danish response to that faux pas.

Perhaps their pragmatism and their tight grip on their traditions stump the Jante Law card, especially since the Danish Royal Family does not seem to put on airs, popping up in places where the rest of us frequent with minimal security. 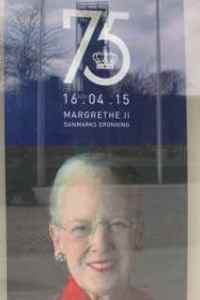 Her Majesty Queen Margrethe of Denmark is celebrating her 75th birthday on April 16. The atmosphere was regal even in Aarhus, where the Queen and her family spent their Easter Holidays. The local paper published a story with the headline, “Cake for all for the Queen’s Birthday”. WHAT!? Did she say, “let them eat cake”? But this queen actually walks the talk.

No wonder the Danish Royal Family is popular amongst their people! 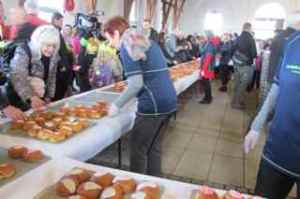 Photo: After the Queen greeted her subjects from the balcony of the City Hall, fastelavnsboller (buns with pastry cream baked inside, normally served around Easter time) were served across the street. 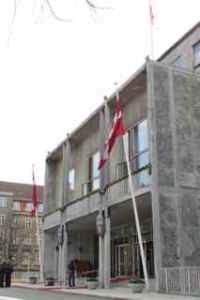 Photo: Aarhus City Hall. Its upstairs veranda is here Her Majesty made an appearance (when I was in line to get my fastelavnsbolle, of course)

Photo: (above) Queen’s carriage returns to Marselisborg Summer Palace. (below) Closeup of the carriage.

Photo: Danish children awaiting their birthday buns after waiving their Dannebrog (the Danish flag) to greet the Queen.

This entry was posted on April 15, 2015 by lavayoda in Denmark and tagged Denmark, equality, queen, royal family, society.